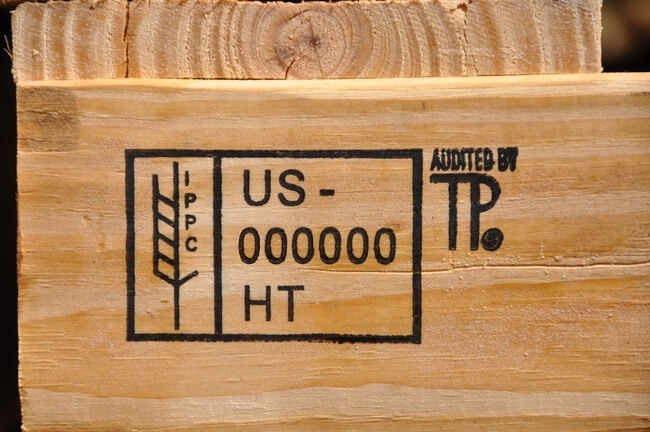 Our customers who export products often ask if they can reuse a repaired pallet without going through the whole heat treatment (HT) and certification stamping process again. For exporters in the U.S., the answer at present is no.

At PalletOne, we follow the HT and stamping standards for export pallets as outlined in ISPM-15. (In case you’re wondering, that stands for the International Standards for Phytosanitary Measures Guidelines for Regulating Wood Packaging Material in International Trade.) In the U.S., the American Lumber Standard Committee (ALSC) sets the guidelines for those standards and provides the certification that pallets that carry the HT stamp have met the necessary requirements.

The ALSC currently requires pallet recyclers to obliterate the original certification stamp, heat treat the entire pallet again and then re-stamp it with a new certification. If the pallet is not heat treated again, the certification mark must be removed and exporters can’t use it for shipping outside the U.S.

The ALSC’s decision on pallets repaired with HT wood has caused some controversy. The National Wooden Pallet & Container Association (NWPCA) believes that under ISPM regulations, companies should be permitted to recertify pallets repaired or re-manufactured with HT wood without going through the heat treated process again. NWPCA points out that this is already being done in other countries, including Canada.

The ALSC, however, believes that it is too difficult to ensure that the wood used for repair or re-manufacturing has actually been treated to meet the HT standards. It argues that erring on the side of caution—requiring another heat treatment for a repaired or re-manufactured pallet before it can be re-certified—helps ensure the integrity of the certification process.

The NWPCA has promised to continue to advocate for a change in the ALSC’s position on this issue.

The certification of pallets as HT for international export is an important issue. The U.S. Department of Agriculture recently investigated one pallet company owner who was suspected of falsifying the certification stamps for four years. When he pleaded guilty to charges brought by the Justice Department, the man had to give up the ownership of his company, pay a $100,000 fine and serve three years’ probation.

At PalletOne we follow the rules for certification for new, repaired and recycled export pallets. You know that when you deal with PalletOne, we can provide everything you need to show that your pallets meet the ISPM-15 standards—-and that can prevent time-wasting delays and other problems in getting your goods out of the country.