CEO, President and Chairman of the Board

A 30-year veteran of the pallet industry, Mr. Wallace serves on the Board of Directors of the National Wooden Pallet and Container Association. He has also served on Virginia Tech’s Center for Packaging and Unit Load Design. A member of Leadership Florida, he served for six years as Chairman of Leadership Bartow and currently serves as Chairman of the Mayor’s Prayer Luncheon. He has also served as a board member for the Alpha Tau Omega National Fraternity.

Mr. Wallace holds a bachelor’s degree in Journalism from the University of Florida and a master’s degree from the College of Education at Michigan State University. Since 2005, he has been sharing his thoughts on the organization, leadership, and communication in an online daily note to teammates called HQnotes. 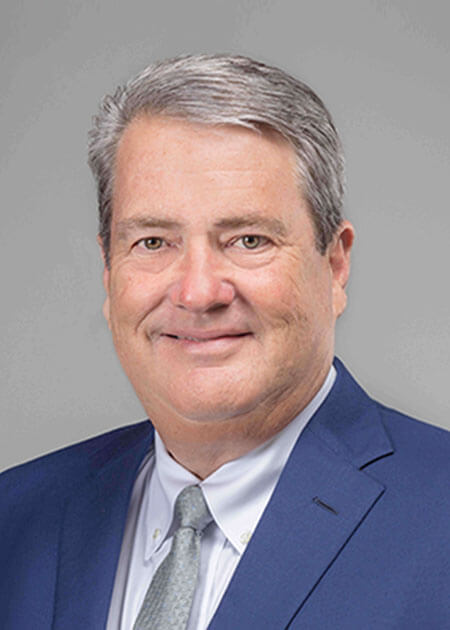 Casey A. Fletcher has served as PalletOne’s Chief Financial Officer since its inception in 2001. Previously, Mr. Fletcher was the Vice President of Finance for IFCO Systems North America and Chief Accounting Officer of PalEx, Inc. He began his career with the pallet industry in 1983 as the Controller for Ridge Pallets, Inc.Mr. Fletcher currently serves on the Board of Directors of the Florida Humanities Council, the Board of Governors of the Florida Institute of CPAs (FICPA) and the Advisory Board of WUSF Public Broadcasting. In 2012, Mr. Fletcher was recognized as the Outstanding CPA in Business and Industry by the FICPA. A graduate of Leadership Florida, an organization fostering leadership development in communities throughout the state, he received its Chairman’s Award for Exemplary Service in 2009.

Matt Sheffield became PalletOne’s Chief Operations Officer in 2014. Previously, Mr. Sheffield was the Regional Manager of PalletOne’s Mid-Atlantic Region, overseeing operations for five pallet manufacturing facilities and two sawmills. He began his career with the pallet industry in 2002 as an Assistant Plant Manager for PalletOne in Shipshewana, IN. He later became a Plant Manager for the Hazlehurst, GA location and then served as Assistant Regional Manager to the Mid-Atlantic region.

Donnie Isaacson has been a PalletOne Board of Director and Vice President since the company’s inception in 2001. Mr. Isaacson is also the Regional Manager of the Northern Division, overseeing operations for two sawmills and two pallet manufacturing facilities. He began his career in the sawmill industry with Isaacson Lumber Co., a family owned business, which was later acquired by IFCO Systems and divested to become part of PalletOne.

Mr. Isaacson is presently a member and Board of Director of the Beth Abraham Synagogue. He is also Vice President of the BDW Watershed and holds memberships with the Northeast Hardwood Lumberman’s Association, NWPCA, the Maine Forest Products Council, the Washburn-Norlands Living History Center, the Yiddish Book Center and the United States Holocaust Memorial Museum.

Mr. Isaacson has a Forestry Degree from the University of Maine and more than 30 years of experience in the sawmill and pallet manufacturing industry.

Bridget Kennedy-Hull became Vice President of Human Resources in 2008 after serving as PalletOne’s Director of Human Resources for five years. Ms. Kennedy-Hull, a veteran in the human resources industry with more than 25 years’ experience, is an organizational development specialist and facilitator. She is certified in numerous assessment instruments including Myers-Briggs and DiSC.Previously, Ms. Kennedy-Hull was a Senior Manager for the Polk County Clerk of Court. She was the owner and principal for Kennedy-Hull & Associates, a national training firm, providing consulting services to Fortune 100 corporations and municipalities. She is also an adjunct professor of leadership and communications courses at Polk State College.

She has served on numerous local committees and boards for charitable and service organizations including The Center for Alcohol & Drug Services, The United Way of Central Florida, The STAR (Successful Teens Achieving Responsibility) School and LifePath Solutions.

Keith M. Reinstetle became PalletOne’s Vice President of Sales in 2003. Previously, Mr. Reinstetle was National Sales Manager for IFCO Systems North America and PalEx, Inc. He has also served as Vice President of Sales for Ongweoweh Corp. and Southeast Regional Sales Manager for Morgan Forest Products.Mr. Reinstetle is presently a member of the National Wooden Pallet and Container Association (NWPCA) and the Western Pallet Association. He has been an NWPCA member for more than 20 years and has served on its Board of Directors. Mr. Reinstetle has more than 30 years experience in the pallet brokering and manufacturing industry.

Keith Warren was named PalletOne’s Vice President of Manufacturing in 2014. Previously, Mr. Warren was the Regional Manager for PalletOne’s Southeastern Division, overseeing operations for four pallet manufacturing facilities. He has a degree in business studies from The Citadel and began his career with the pallet industry in 1990 as an Assistant Plant Manager for Ridge Pallets, Inc. in Walterboro, SC. He later became a Plant Manager and Area Manager for PalEx Inc. and IFCO Systems North America in their Mid-West Region.