If you hear me teach or train very much, I usually trot out a training tool called the Jo-Hari Window.

The tool was designed by two guys named Joe and Harry. It looks like a window pane. 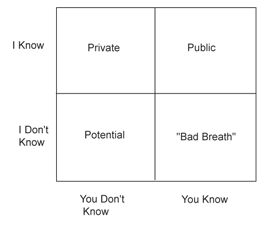 The theory is simple. In every relationship there are four things:

It’s #3 I would like to talk about, the “bad breath” pane. Frequently, when I get called in to work out a difficult issue, I find the thing that has caused the issue is the thing that everyone thinks, but no one is saying.

Let me tell you what I have learned. It’s the person who will raise the “difficult” thing who causes us to get better. And, if it’s done correctly, that person will be respected and admired by her peers.

Recently, I had an experience where someone let me know that something I was doing harmed our interaction. I appreciated the courage. Valued the opinion. Reasoned that he was not the only one who felt that way. Made a personal commitment to change.

Is there someone in your life or workplace that could be more effective if he knew what you know? Take your time. Consider how to phrase it. Role play it with someone you trust. And, courageously, communicate.